The Darling Range project comprises of one granted exploration license (Black Hill – E70/5147) and two exploration licence applications (Batty Bog – E70/5329 and Mistake Creek E70/5403). The project covers 26 blocks or approximately 75km2 and is located between 100km and 120km north-east of Perth. The nearby country towns include Northam, Toodyay and New Norcia and Gingin being 40km to the west (Figure 4.2). 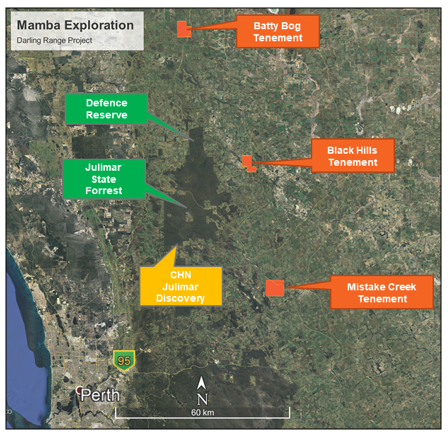 The project covers parts of the northern portion of the high-grade Jimperding Metamorphic Belt and associated peripheral migmatites. This belt is in the Western Gneiss Terrain, which is the western-most province of the Archaean Yilgarn Block. Outcrops within the project area were noted to be fairly poor and were dominated by North trending dolerite dykes and quartz/quartzite ridges which appear to be structurally controlled.

Black Hills
In 1995, CRA Exploration Pty Limited conducted drilling on the current tenement. The programme was designed to test for gold mineralisation within the laterite and bedrock profile below previously defined surficial Au-As anomalism

The tenements have had very little historical exploration however based on the regional aeromagnetic data, a package of ultramafic/mafic rocks trend through the tenements. These units to the north and east contain low-grade nickel and copper mineralisation. These units remain untested on the tenements. The Mistake Creek tenement is adjacent to the Mandrake Resources Jimperding project.

Within the Black Hills tenement, there are several old workings located in the area. Some grey quartz vein float is present around some of the old shafts and most appear to be located on or near banded iron formation float. Additionally, within the tenement, there is a circular magnetic feature, which is interpreted to be an intrusion (Figure 4:3).

Intrusive related nickel, copper and PGE systems are known to occur in the district and the feature is untested. This along with the gold anomaly on the project represent a significant target, particularly in light of the recent nickel, copper and PGE discovery made by Chalice Gold Mines Ltd at Julimar, approximately 30km west of the project. The tenement is prospective for gold and base metals styles of mineralisation with the best opportunity being a search for narrow, high-grade gold shoots. 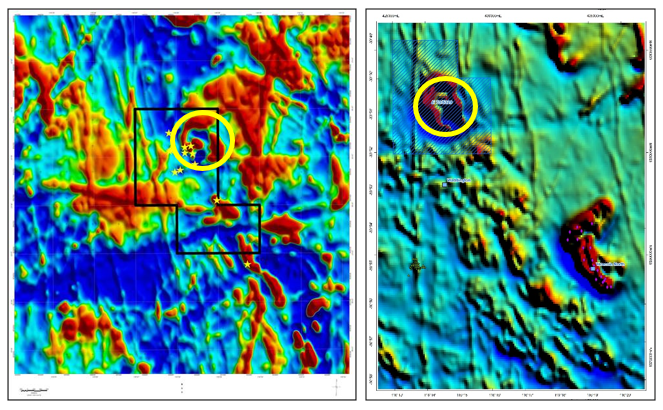 The Batty Bog tenement has had very little historical exploration however based on the regional aeromagnetic data, there appears to be a circular magnetic feature which is either an intrusive feature or a highly folded banded iron formation.

The Mistake Creek tenement has had very little historical exploration however based on the regional aeromagnetic data, a package of ultramafic/mafic rocks trend through the tenement. These units along strike to the north and east, on Mandrake Resources Jimperding project, contain low-grade nickel and copper mineralisation which warrants testing on the tenement.