Exploration Licences E08/2913 and E09/2332 and Exploration licence applications E08/3190 & E08/3266 forms the Ashburton Project covering 193 blocks or approximately 580km2 of the established mineralogical terrain of in the eastern part of the Gascoyne Mining District of Western Australia. The project is approximately 190km south of Onslow, 240km west of Paraburdoo and 220km north-east of Carnarvon.

The Ashburton project area lies to the east of the Carnarvon Basin within early Proterozoic rocks of the Morrissey Metamorphic Suite from the Capricorn Orogen in the Gascoyne Complex. Gold mineralisation is associated with quartz veins hosted in the early Proterozoic schists and gneisses of the Morrissey Suite. The gold mineralisation is commonly, but not universally, associated with malachite, chalcopyrite and minor galena with a highly variable structural control and orientation.

Early exploration comprised small scale prospecting chiefly for gold and base metals which is evident by the number of shallow prospecting pits. More recently, work comprised geological mapping around known occurrences, rock chip and stream sediment sampling, reverse circulation (RC) drilling and an induced polarisation interpretation. The project area is prospective given it lies on a major regional structure which separates into numerous “horsetail” structures within the project (see Figure 4.7). This regional setting is similar to the geological setting of the Glenburgh Gold Project (Gascoyne Resources Limited) which contains ~1.0Moz of gold. 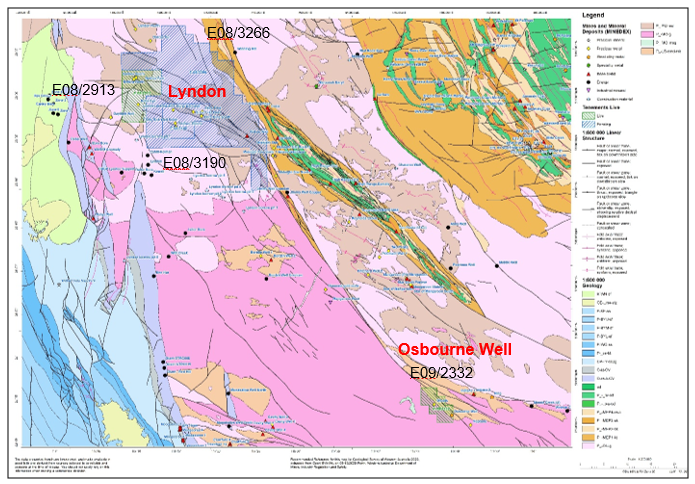 Early exploration around Lyndon Station comprised small scale prospecting chiefly for gold and base metals which is evident by the number of shallow prospecting pits. The main areas of interest include the Lyndon Bettina, Eric’s Find, Broken Thumb and 30 Bob Well.

Prospect scale mapping and rock chip sampling results up to 46.5 g/t Au were reported from the mineralised veins at Bettina East.

A total of 31 RC holes were drilled for a total of 1,841m at Eric’s Find, Lyndon Bettina, Bettina East, Skarn, Broken Thumb and Thirty Bob Well prospects significant intersections include:

The Osbourne Well tenement (E09/2332) is located approximately 70km to the south-east of the Lyndon area and is located in the major regional structure. The area has had very little previous exploration activity. Exploration to date has consisted predominantly soil sampling and rock chip sampling. This sampling identified a number of significant rock chip results including:

Follow up trenching has been undertaken which identified 3m @ 1.9 g/t gold and 1m @ 5.2 g/t gold beneath the soil anomaly, however this did not adequately explain the rock chip sample results.

Below the historical shallow pits, three narrow quartz veins were modelled that represent a potential drill target. Integrated Resources Limited announced to the ASX shallow drilling intersected up to 4m @ 21.5 g/t and 4m @ 7.7g/t in two of the veins at Lyndon Bettina on 17 November 2010 (See Figure 4:8). 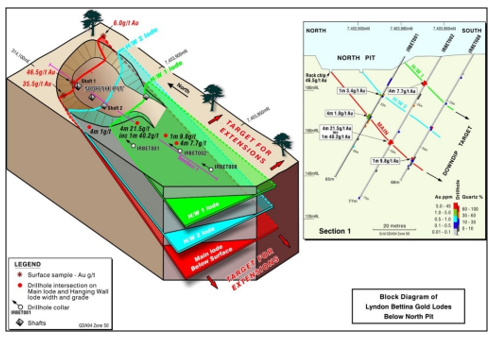 The Lyndon area is prospective given it lies on a major regional structure which separates into numerous “horsetail” structures within the project. This regional setting is similar to the geological setting of the Glenburgh Gold Project (owned by Gascoyne Resources Limited) which contains ~1.0Moz of gold. Shallow auger/vacuum drilling is recommended over the project to test below the shallow transported colluvium.

The Osbourne Well area is covered by around 0.5 to 2m of colluvium which masks bedrock anomalism in most cases. The wide-spaced soil sampling is also ineffective in a highly stripped regolith profile in the northern Gascoyne / southern Ashburton region. In the region there is little to no supergene dispersion of gold, as a result, the sampling completed to date does not represent an adequate test of the region, particularly given the regional structure that runs through the project remains untested.